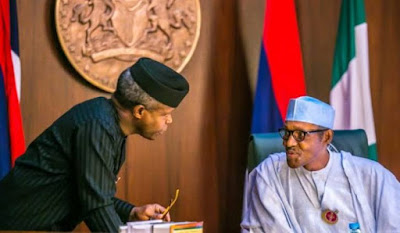 The sacking of 35 aides of Vice President Yemi Osinbajo on Wednesday was the latest in the string of humiliations hurled at him by the Muhammadu Buhari presidency or better the cabal in the presidency.

Beginning from a succession of moves in September, the Vice President appears to be a target of deliberate arrows of power emasculation.

Denied by the ruling All Progressives Congress and presidency officials, the drama keeps unfolding in new, inexorable plots that even the politically blind knows that unusual things are happening at Aso Villa.

The first shot was fired on 16 September when Buhari announced the setting up of an Economic Advisory Council, without notice to the Vice President who had run an advisory council, that had the likes of Aliko Dangote as members.

Noticeably missing in the new council, headed by Dr Doyin Salami, is the absence of Dr Adeyemi Dipeolu, the economic adviser in the presidency for the past four and half years.

To further make Dipeolu totally redundant, in a supposedly one presidency, President Buhari announced on Tuesday the appointment of Sarah Alade, a former CBN deputy governor as special adviser, with an enlarged portfolio, on economy and finance.