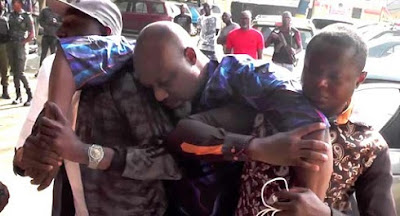 The officers forced the lawmaker, who was on the hospital bed, into an unmarked vehicle and drove him to an undisclosed location, witnesses told Premium Times.

Mr Melaye was arrested last week after police laid siege on his home in Maitama, Abuja, for eight days.

He turned himself in after hiding in the house for days. Mr Melaye has been in the hospital since then. Police accuse the senator of being involved in the shooting of an officer in his native Kogi State. More to come later.

Share
Previous Taylor Swift & Selena Gomez Are Together Again For First Post Rehab Pic
Next No Two Candidates Are Allowed To Use A Single GSM Number, JAMB Warns