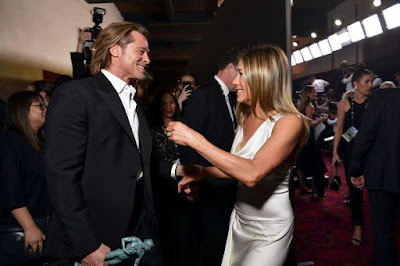 It’s been 15 years since Jennifer Aniston filed for divorce from Brad Pitt but it’s still the relationship that no-one can forget.

And fans were beside themselves earlier this year when rumours abounded that the former couple were back in love and on the cusp of going public.

Indeed, in what is said to have been a carefully choreographed plan, they packed on the PDA during awards season, gushing over each other backstage and even holding hands and exchanging a kiss at the SAG Awards.

“They wanted to send a clear message: they love each other very deeply, and this new connection they share is growing stronger all the time,” a source told heat magazine.

“It has taken them both a long time to pluck up the courage to be pictured together like this and now it has happened they can take things to the next level.”

However, it hasn’t been easy with a lot of soul-searching and therapy is said to have gone into the reported reunion, especially after the years of heartbreak Jen, 51, endured, when Brad left her for actress Angelina Jolie back in 2005.

It’s only after Brad and Angelina’s acrimonious 2016 divorce that he’s believed to have reconnected with ex Jennifer, attending her 50th birthday and a Christmas party at her LA mansion.

And before that red carpet PDA, a confidant of the former Friends actress told The Mirror they’d enjoyed at least five secret dates, including a tryst at Jen’s home over Christmas.

“I don’t think she’s ever really stopped loving him, even though he broke her heart when he left her for Angelina Jolie,” the source said.

“It has taken a long time but she has forgiven him for everything – forgiveness has been a big part of them moving on.”

And a long-time associate of Brad’s movie production company Plan B confirmed: “All he can talk about is Jen. They have reignited their romance and I haven’t seen either of them this happy in years.”