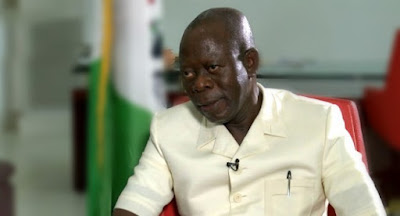 Governors who are members of the All Progressives Congress (APC) have declared support for the court order suspending the National Chairman of the party, Comrade Adams Oshiomhole.

The governors also asked the National Executive Council (NEC) of the party to immediately replace him to fill the vacuum created by his suspension.

This followed an Abuja High Court order on Wednesday which ordered the party to  stop recognising him as chairman pending the determination of a substantive suit seeking his removal.

To secure his seat, Oshiomhole rushed to a Federal High Court in Kano to secure an order  restraining the Independent National Electoral Commission (INEC) from recognising any other person as the national chairman of the party.

But the governors through the Director General of the  Progressive  Governors Forum (PGF) , Salihu Lukman, yesterday asked Oshiomhole who became the chairman of the party in June 2008 to quit.

“The only possible remedy to his suspension is to humble himself and go back to his roots and resolve all the causes of the problem.

“What is the root cause of the problem? It is the suspension by his Ward 10 in Etsako West Local Government Area of Edo State. Since November 2, 2019, the Ward 10 executives passed a vote of no confidence on Oshiomhole and suspended him from the party. Somehow, Comrade Oshiomhole and his supporters treated this action of the ward executives with contempt to the point of projecting Comrade Oshiomhole as superior to the Ward”, he said.

The governors said pending the resolution of the crisis, article 17 of the party’s constitution should be invoked.

“ We need to invoke provisions of Article 17 (vi) which provides that in the event of a vacancy, “the relevant party organ shall appoint another person to act in his place pending ratification by the National Convention or Congress.