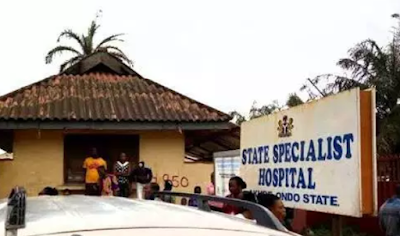 The corpse of a day-old-baby is missing at the morgue of the Ondo State Specialist hospital in Akure.

The new baby had died upon delivery.The mother too lost her life in the throes of labour.

The corpses of both mother and child were deposited at the morgue of Police Clinic  on Wednesday.

A family source who pleaded not to be named confirmed the incident to our correspondent in Akure on Saturday, adding that it was surprising when they visited the hosptial and could not find the corpse of their relative.

The source who explained how the corpses of both  mother and child were brought into the hospital said they were due for burial hence their visit to the morgue to retrieve their corpses.

“We (family members) got into the hospital today (Saturday) to collect the corpses of the deceased but noticed that they could not find the been  body of the baby again.

“They only brought out the body of his mother and the placenta and the naughty mortuary attendants could not explain to us how the baby got missing from their reach.

“In fact, hell would have been let loose in the hospital today becuase we were very angry that we brought in two corpses (mother and child) but they could only bring out the mother alone.

“So, where did they keep the corpse of the baby but we were begged to exercise patience over the issue as the police has been invited to come investigate how the dead baby got missing from the morgue” he said.