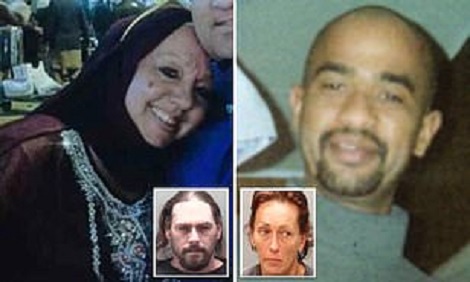 A mother who took her two young daughters with her to dump their father’s body in Michigan after he had been beaten with a hammer and burned beyond recognition has been arrested in Italy after 18 years on the run.

Beverly McCallum was arrested in Rome on Thursday over the 2002 death of her husband Robert Caraballo in western Michigan.

McCallum, who had an international arrest warrant against her, was caught after checking into a small Rome hotel overnight.

Italian hotels are required to register guests in an online system that is linked to a police database.

Prior to her arrest, U.S. authorities had been trying to extradite McCallum from Pakistan where she is believed to have fled to in the years after her husband’s violent slaying.

Murder charges were filed against McCallum last year over her husband’s slaying.

Her daughter from a prior marriage Dineane Ducharme and her friend Christopher McMillan were also charged.

All three were additionally charged with conspiracy, and disinterment and mutilation of a body.

The victim’s body was found in a footlocker dumped and burned in a blueberry patch in western Michigan in May 2002 just days after his death.

His remains were so badly burnt that he went unidentified until 2015 when authorities received an anonymous tip that led them to McCallum’s daughter who was 21 at the time of the murder.

Ducharme told police that her mother killed Carabello and that she and her friend helped clean and dispose of the body.

She said her mother made her do a practice run the day before and that the murder took place in the basement of a home in Charlotte.

Police say McCallum pushed her husband down the basement stairs and then all three attacked him when he tried to get back up.

Share
Previous Venezuelans too poor to have s.e.x as economic crisis leaves them unable to afford condoms or a hotel room
Next Mercy Johnson urges 2face to run for president