Akon to build own CITY in Senegal named Akon City 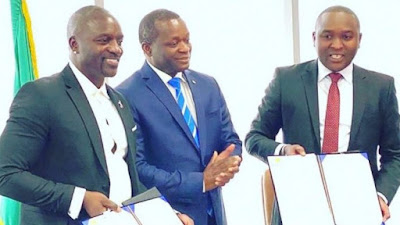 Rapper Akon has put pen to paper on a deal to create his own city in his home country — Senegal.

The 46-year-old uploaded an image of himself holding a contract on Instagram along with the caption: ‘Just finalized the agreement for AKON CITY in Senegal. Looking forward to hosting you there in the future.’

Akon – whose real name is Alioune Badara Thiam – first announced plans for the 2,000 acre city back in 2018, then dubbed Akon Crypto City after a cryptocurrency he planned to launch.

While the name of the city has changed, Akon has given few other updates about what exactly his plans for the site entail.

In an interview with actor Nick Cannon in November last year, Akon claimed the city would run completely on renewable energy and have its own airport.

He said that construction began in March and would take a decade to complete, with stage two beginning in 2025.

In the same interview he also touted plans for his Akoin cryptocurrency, which he previously said would act as the city’s primary currency.

It comes just days after Senegal’s state-owned tourism company SAPCO said that Akon has pledged to invest in tourism in the country.