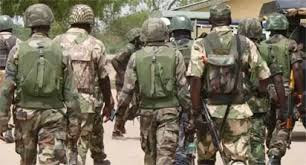 Ogunboyo, who was the head of a vigilante group in Iyin Ekiti, was said to have committed the offence on December 15, 2016, in the community.

Justice Lekan Ogunmoye, in his judgement, said the charge of murder against the convict could not be substantiated, but a case of manslaughter was established.

“Considering his age and the discretion of the court, he is hereby sentenced to 25 years imprisonment without an option of fine,” Ogunmoye ruled.

The police prosecutor, Seyi Akomolafe, had told the court that an eyewitness, who reported the matter at the Igede Divisional Police Headquarters, said the accused and other vigilante members in Iyin Ekiti came to the deceased’s compound on the allegation that a thief was taking refuge in the house.

He said, “Ogunboyo sighted the deceased and confronted him for being rude and disrespectful because he refused to stand up while a search of the compound was being conducted.

“Furiously, he brought out his dane gun and shot the deceased, while he took the remaining four people in the house to his own house, where he detained them till daybreak when they were released.

“When the others got home, the deceased could not be found. When Ogunboyo was confronted over the missing member, he said his relations had come to take him away.

“But there were blood stains on the floor and indications that he was dragged on the floor. The corpse of the deceased was later found in a deep pit along the Awo-Ekiti Road.”