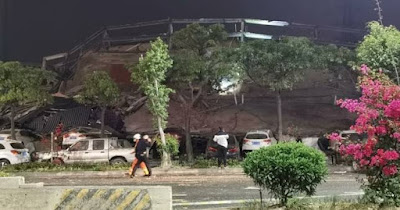 Two dozen people have been rescued from the rubble after a five-storey hotel housing quarantined coronavirus patients in China collapsed.

The Xinjia Hotel in Quanzhou in the Southeast Fujian province collapsed on Saturday, leaving around 70 people trapped.

Video from the scene shows emergency workers combing through the wreckage in a bid to save victims. 28 people have been rescued, according to local media.

It is not yet clear what caused the building to cave in. State media confirmed that it had been used to observe

people who had come into close contact with coronavirus patients.

#BREAKING: A five-storey hotel in Quanzhou in the Fujian province suddenly collapses on March 7 evening. Several Chinese media outlets say that the hotel is currently being used as a quarantine site for #COVIDー19. About a dozen have been rescued. Internet video. pic.twitter.com/dMIJivGXlI

Share
Previous Lovers of 13 years who started dating in SS1 are about to tie the knot (photos)
Next Kano court gives woman N50,000 option of fine after sentencing her to 3 years in jail for killing son